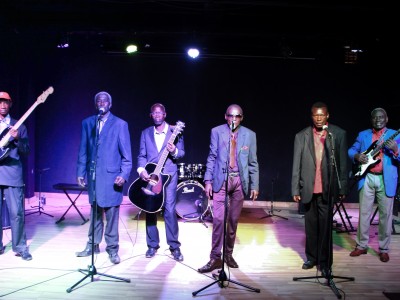 Grand Mike Jazz is a Congolese group from Maniema; the group was founded around 1968 by Rachid King, who passed away in the USA in 1982, and is named after the Mikelenge river which flows through the province

Thanks to their extensive repertoire, which draws on Folk Music and Rumba, Grand Mike Jazz have managed to stay original and their music has stood the test of time.

These seven 50s-era musicians have won the hearts of audiences across generations thanks to their performances, choreography, the quality of their music and the depth of their lyrics.

With their typical style, unparalleled harmonies, and extraordinary stage presence, Grand Mike Jazz are and will continue to be one of the mythical groups from the KIVU region.